IKa’s blog was where P.S. Triple started, on November 28, 2006, and ran until July 17, 2012, when Episode 120, the last MS Paint-style installment, was posted. However, before, during, and after its run, IKa posted plenty of other works to his blog, including many four-panel comics. In today’s “omake” entry, we’re going to poke around IKa’s blog a bit and see what interesting things we can find. 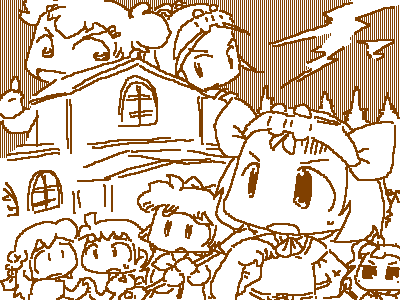 An illustration from a post introducing some of the stories on the second drama CD.

Going by his profile, IKa’s blog has been running since at least the year 2000, and as of 2014 has fallen into a semi-dormant state. He also has Twitter and Pixiv accounts, though these too haven’t seen much action since 2014.

Before P.S. Triple made its debut, IKa was drawing other 4koma featuring superdeformed girls, and most (if not all) of these works are fanart. One such series he was drawing in 2006 was based on Aria, the slice-of-life manga and anime about young women who work as gondoliers on a future Mars. Note the black lines used in this comic. It seems that IKa’s shift to brown lines occurred later that year, as seen in a Touch Detective/Izuna: Legend of the Unemployed Ninja crossover fanart, a Pokemon Diamond/Pearl sketch, and, of course, the first episode of P.S. Triple. 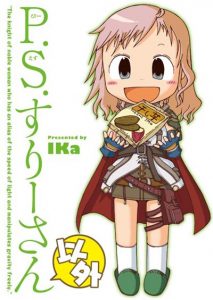 As P.S. Triple took off, IKa continued on with the fanart 4koma. Two series that caught my eye were focused on Lightning from Final Fantasy XIII and Etrian Odyssey. There’s also fanart that crosses over into P.S. Triple; for example, this drawing of Triple dressed like the Vocaloid (and Project Diva) star Hatsune Miku. In late 2009, many of IKa’s non-Triple 4koma were compiled into a doujinshi, Other Than P.S. Triple (P.S.すりーさん以外), which was sold at Comic Market (aka Comiket) 77. The cover of this doujinshi, featuring Lightning, parodies that of the first P.S. Triple book; you can see a comparison of the two here.

On that note, as P.S. Triple rose in popularity, the number of announcements of new products on the blog started to increase. In addition to four books and two anthology doujinshi (which we’ll look at in a later post), there were three drama CDs published in both physical and digital form by HOBiRECORDS. IKa has also blogged about a few others’ P.S. Triple fanworks, such as this Triple garage kit and a papercraft of X-Locks. Incidentally, two of the oddest P.S. Triple products produced have not been mentioned on IKa’s blog, as far as I can tell: special aluminum stands for game consoles.

IKa’s blog also features lots of other bits of ephemera, some of my favorites of which are the standalone illustrations of Triple and her friends. Enjoy these drawings of Triple celebrating her birthday with X-Locks, Saturn-san, a midriff-baring Whee!, and the suspiciously-familiar Megadrive-san. There are many more, some of which, like that Saturn-san post, feature characters that never appeared in P.S. Triple‘s English-language run.

After hitting it big with P.S. Triple, IKa would go on to create other professionally published works offline, including Esa-Emu Family People, Megadora Bucho Riruna-chan, and Kakugeibu! His art would continue to grow more refined over time as well; notice how much softer and rounded his style had become in this 2012 P.S. Triple comic. Even after his success, though, he still drew fanart, not forgetting his roots.