P.S. Triple is just one of a handful of series that has anthropomorphized game consoles. One famous example is the Hyperdimension Neptunia series of games, which takes place in the world of Gamindustri and features characters based on fictional consoles. However, since Neptunia has a ton of releases, including anime adaptations in addition to games, I will not be covering it in the Omake. 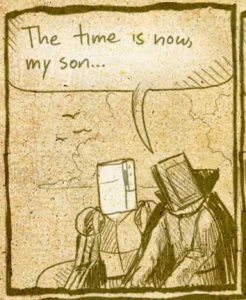 The PlayStation Lords contemplate their next move. From Comic #67: All Will Perish!

Instead, I’d like to take a look at a series which has much more in common with P.S. Triple: Castle Vidcons. Both are webcomics featuring parodies of real systems, and were written about and during the seventh console generation. Both webcomics also sport an absurdist streak at times in their sense of humor.

Castle Vidcons, which started around 2008 and sputtered out in 2016, is an English-language webcomic by Tyler Rhodes, and takes place in a Middle Ages-style world, where consoles (and PCs, and anything else that can play games) rule as kings. Every installment of the comic is lineart drawn atop a parchment-paper texture, with the occasional bit of color or sometimes even animation. Meanwhile, the characters sport human bodies while their heads are in the shape of hardware, peripherals, or software.

The console companies and lines are lordly houses (“The House of Nintendo”, “The House of Playstation”, etc.), controllers and other peripherals serve as regal ladies and aristocratic hangers-on, and the peasantry take the forms of cartridges and both floppy and optical disks. The most prominent character early on is arguably Lord Wii, a popular and ruthless ruler.

Some of the quirkier pieces of gaming hardware have unique roles. The Phantom, an infamous vaporware console announced by a small company in 2003 (though apparently, hardware does exist) makes a Castle Vidcons appearance at, where else, a theater. One obsolete console, the Sega Saturn, is a bandit in this Mario Kart-themed comic. Meanwhile, Lord N-Gage and Lord Gizmondo, based on two failed handhelds (the former most famous for “sidetalkin'”), aren’t taken seriously by their fellow lords.

My favorite take on a console in this strip is for the PlayStation Portable. At the time, its hardware made it a favorite for hacking and playing pirated games. Given this situation, it’s no surprise that Castle Vidcons‘ PSP is a notorious pirate king. It’s a far cry from P.S. Triple‘s Pea, who enjoys some Monster Hunter-fueled success, but this just further illustrates how the PSP’s reputation differentiated between countries. 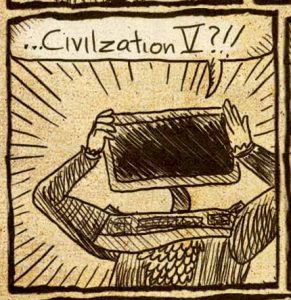 The subject of this installment is rather obvious. From Comic #88: Such Nonsense.

Like P.S. Triple, Castle Vidcons often used the hot gaming news of the day as material for various comics. For example, here is one about Final Fantasy XIII appearing on the 360 in addition to the PS3; note Shiva, a summon who can turn into a motorcycle in the game, depicted here in their traditional Hindu form. This one is about the completion and release of the fan translation of Mother 3. And this comic is about the revival of Duke Nukem Forever, formerly the King of Vaporware.

Some current events referred to in Castle Vidcons can be rather tricky to pinpoint, leading readers to try and figure out what was actually going on in those comics’ comment sections. Here’s an odd comic that seems to be about the death of the original Xbox’s “Duke” controller, and here’s another about the “Steam Box”, which later became Steam Machines. If you’re ever confused about a Castle Vidcons installment’s subject matter, just read the comments and chances are they’ll provide some clarification.

Castle Vidcons is fairly unique amongst video game webcomics, and I’m a little sad that it never continued, even after introducing characters based on a couple modern consoles and some VR headsets. Alas, we may never see Lord Switch become the latest ruler of the House of Nintendo, but at least all of the old comics are still online, to give us a middle ages-themed console nostalgia trip.

One final note: if you want to read Castle Vidcons from the very beginning, start here. The site’s own “First Comic” link goes to the wrong page.

ETA (March 22, 2021): By chance, I happened to learn that the Castle Vidcons website is no more. I’ve updated all the related links in this article and on the Links page to their equivalents on the Internet Archive. Please let me know if you run into any problems!