Archive for the ‘Site Business’ Category 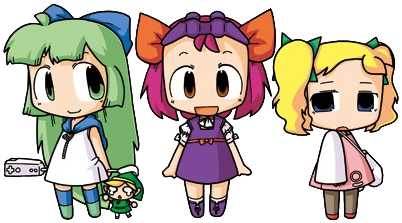 Gaming webcomics have been around for a long time, but in the late ’00s, there was one like no other. It was a 4koma (4-panel comic) from Japan that turned video game consoles into idol singers, and it could be just as dramatic as it was funny. This comic was P.S. Three-san, which was briefly localized as P.S. Triple.

I’ve been a fan of P.S. Triple ever since that official localization, which I first discovered on the now-defunct gaming site 1UP. The localizer, a company called Mission One, ended up posting fifty comics to their 1UP blog, and translated a hundred in all for two iOS apps, which I picked up later. Over the years, I have also picked up all four of the Japanese book collections, some of which included limited-edition goodies, and two doujinshi authorized by IKa, P.S. Triple‘s creator. Even though I couldn’t understand them, these imports allowed me to enjoy the world of Triple and her colleagues long after Mission One’s localization ended.

Both 1UP and the apps eventually disappeared from the internet, but thanks to the magic of backups, my copies of the latter remain, and I would like to share their contents with you. For the next couple months, all of the officially-translated P.S. Triple comics—two comics each weekday, for a total of ten per week—will be posted on this site for the enjoyment and analysis of anyone and everyone. Mission One’s commentary will be included for each strip, as well as some thoughts of my own, and there will also be supplementary “omake” articles every once in awhile that cover various topics related to P.S. Triple.

The first twenty strips are available right now, as is the first omake article, which is about the PlayStation 3. The first comic is here if you’re ready to get started, but if you want to learn more about P.S. Triple beforehand, I encourage you to check out the About and Characters pages.

Finally, a special thanks to bitprophet, without whom this project would likely not exist.

Thanks for reading, and enjoy!

Comments Off on Welcome to P.S. Triple Classic!